This is a Forum for the Mod Team

Eternity of Azjol'Nerub BETA 0.14a

Eternity of Azjol'Nerub BETA 0.14a

This is a AoS made by me and Solicran, it is a 10 player map. Currently there are 12 Heroes. And there are well, not soo many items. The Map himself is based on the synergy between the heroes and skill synergy of the single heroes, so example: a hero is based on massive aoe damage (magmathid) but is only effective with a slow hero (sands of time) who holds the enemies in the slow. It is overall really unbalanced and I shortly removed all the heavy bugs.

So give please balance suggestions, maybe hero ideas for the 4 heroes i could add (so it would get 16 heroes overall). And say what you think of that map, critism are welcome.

-12 unique Heroes with a own concept, story (the "!" infront of them), triggered skills(mostly) and a battle strategy.
-auto-upgrading of the forces.
-95% of the spells are trigger-enhanced, and a few JASS.
-relatively Balanced, it is still BETA.
-some self-made Skins (Sands of Time by Solicran, Chaos Ravager by redscores).

Unlocked Version, but give credits to the maker if you use heroes or spells or skins out of it(sands of time skin = solicran, chaos ravager by redscores)

UPGRADE: 0.07 is out!
-weather system.
-many commands for the usage of the player.
-Sorrow nerfed.

UPGRADE: 0.11 is out!
-many balancings and bug fixing.

UPGRADE: 0.12 is out!
-made game play faster.
-completely reworked the nerubian queen, now known as broodmother.

UPGRADE: 0.13 is out!
-Many many many balances.
-Added Scroll of Town Portal. 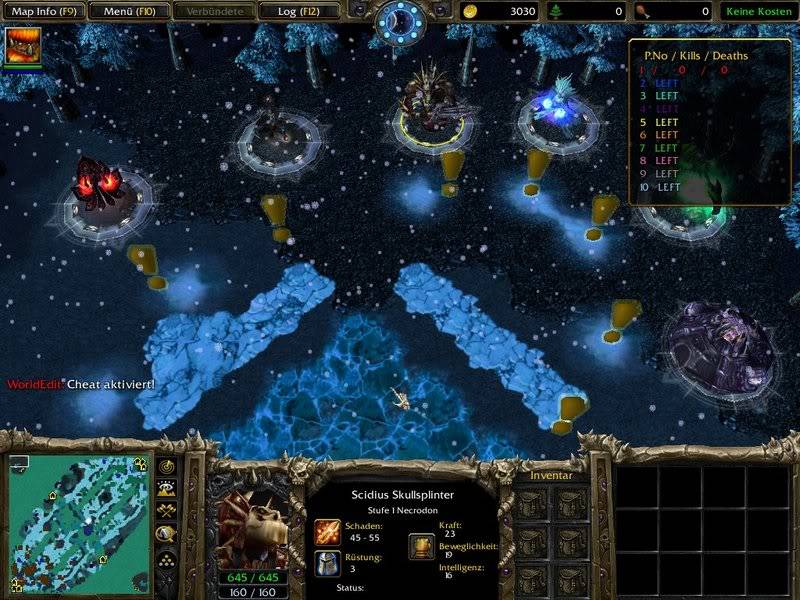 The Undead Heroes, Chaos Ravager and the Dread of the Seas missing(not seeable, just the "!" of them at the side) 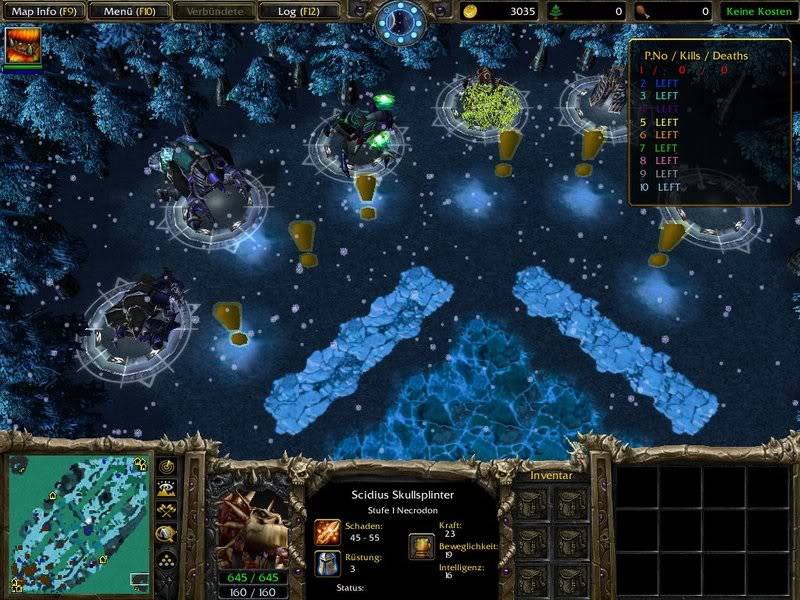 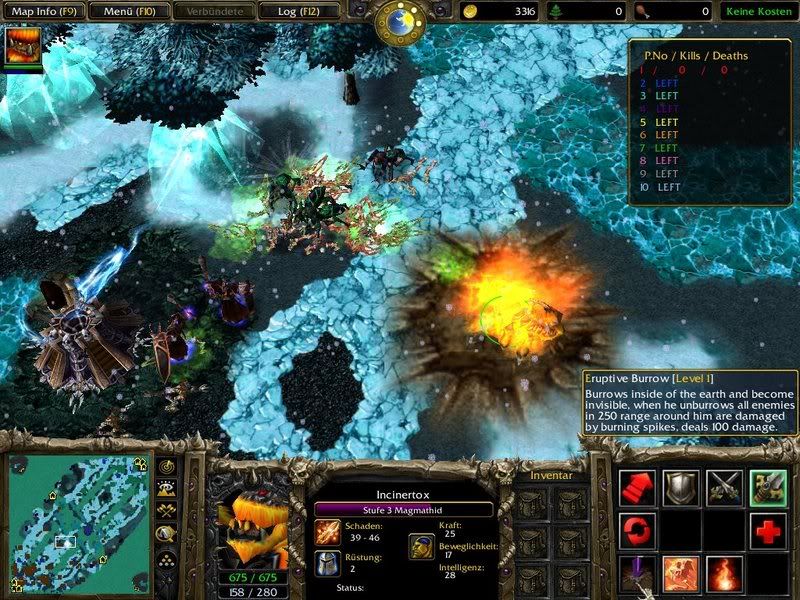 Mmm...
Great Game, Especially internet play. >=]
Got Some things for you to look at tho. xD
-Someone Complained that the Demon For the Ritualist is to weak?
I don't personally know this, I've tried him only Once.
-Necrodon's Corpse Fall Tooltip is completely screwed Up. From what it says when I Got to level it, To when I Have it.
So I Actually don't know how much damage it does, but Sometimes it seems to do no Damage at all.
-The Creeps Don't seem to Auto-Upgrade? Someone Pointed this out, and I Wondered if there was something wrong.
-Sorrow's Torment Levels every 8 Levels, So, to get Level to get level 3, Sorrow has to be Level 24, Max Level 20? Problem?
-Eventually, The Glow on The Ravagers Sword Disappears after long period of Game Play. I Do not know what causes this,
I Will look into it tho.
-People Complain that Both the Item, and the Mutants Poison affects are Way to Strong and Need to be Nerfed, Reduced, or anything in between.
-Anti-Camp! FTW! We had a Zodioc just stay Near there Healer and beat the crap outta People, Yea, Anti Camp. xD
-People have Complained that The Chaos Ravager's Ultimate Charge has to short of Distance, he Is Charging at the enemy, I personally tried it myself, and it doesn't seem to be to far of a range.
-Also, About the Chaos Ravager's Ultimate, It Doesn't Negate the Targets Armor. Someone Handed me Control and I Tried this one Personally, No Armor Penalty.
-Zodioc + Frostbite = Still Attacking.
-Please, Get rid of Leavers, Sure They Make, Semi-Ok defense all Bunched up at the Main Base, but there just easy Kills. Maybe a Message that they left also, Please?

in it's current state, this map shows no semblance of balance whatsoever. IMO you should take back into a private beta phase and work out the gamebreaking balance/bug issues first, and release it when you've got most of the glaring errors out.

Theres also a ton of tooltips giving false information. I thought it was a little odd reading Crush Knee's tooltip. Lv1 skill giving 90% slow ftw. Durations are totally off too.

That aside, I can see that there are many interesting heroes with unique skills you've put a lot of effort into. I particularly liked the big tentacle monster

But it thought it was just plain bollocks that you forever attack at the pace of a dying cow, and your damage is always sub-par.

If I might make a recommendation, his third skill, on top of giving you more tentacles, should allow +(SkillLvl/2) tentacles to hit the same target at the same time, rather than limiting it to one tentacle only, to a maximum of 4 tentacles assraping the same target. It's easy to counter, they can just stick with the creeps, and makes you not useless when a fight should break out away from the lanes.

His second skill, on top of improving defense could also decrease tentacle attack cooldown by a formula of 0.1/level or whatever you find better.

His first skill could passively increase the base damage of the tentacles by 5 per level, to a maximum of 30 added to your STR-damage. Also, the active effect of the first skill needs to be looked at. In it's current state, only a complete dolt would level it beyond lv1. Look towards decreasing cooldown per level, or tone down the stun at level 1 and improve it per level.

To fix players using Frostbite to give him a form of attack, you could give him a base damage of -9999. No amount of weaponry will give him attack damage then.